Get your free stairlift quote

Overweight people with mobility issues can face especially difficult problems in the home, especially in relation to getting up and down the stairs. Stair lifts are the ideal solution to overcome such problems, allowing them to access other floors in the home without putting extra strain on already stressed muscles, joints and heart. A significant proportion of overweight people also suffer with vertigo which puts them at risk on long flights of stairs.

But here's the problem; Stairlifts have a maximum weight limit.

In the UK, the maximum weight limit for a standard heavy-duty stairlift has, up until now, been 25st (160kg).

Stannah's heavy duty offering in this marketplace had a max weight limit of 25st (160kg). This is the Stannah Saxon straight stairlift or you could opt for the Starla model on a straight rail.

Acorn's standard straight stairlift, the Acorn 130, offers a maximum weight limit of 19 stone (120kg), but do cater for the larger user if you have a curved stair case with a 25 stone (160kg) limit on the Acorn 180 model.

Companion, part of the Handicare Group, previously offered their 1000 XL model which also takes up to 25 stone. 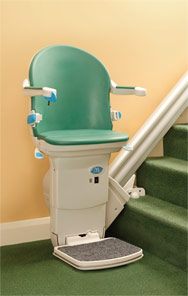 Now for the good news; Companion brought out a new Minivator 1000 XXL model which takes up to 31st (197kg), yes a whole 40kg more than its predecessor and competitors.

The XXL also comes with a host of new features designed for the larger user, including:

In a very recent update, Companion Stairirlifts have now simplified their product range, reducing the number of stairlift model names, and now simply refer to their heavy-duty straight stairlift as Minivator 1000.

If your next question is "How much does it cost?" we can happily assist in answering that question by clicking here, where we compare a range of stairlift models and their prices.

If you're looking for a heavy duty stairlift at the best possible price, let us help you.

Get a free stairlift quote

Very occasionally you come across a company which exemplifies what true professionalism and commitment to customer service is all about. In my recent experience, Stairlift Experts is a prime example.

I needed to get a stair lift for my lovely Mum as she was having difficulty climbing all the stairs in her house. I hadn't a clue what to buy or where to buy it from until I found the Stair Lift Expert website